Another meal inspired by my time in Montreal last fall- Veggie Korma has now become one of my favorite comforting meals.  It’s rich, creamy, full of spices, and although it tastes great eaten by itself, it’s just begging to be soaked up with fluffy basmati rice or a piece of flatbread!

If you’ve skipped my ramblings and already seen the recipe, I know the ingredient list looks long, but DON’T PANIC! The majority of it is spices. To make the cooking process easier, I suggest measuring them all out at once (as I did below) so when you actually start making the Veggie Korma, you can do so with ease without chasing 10 jars of spices at once. 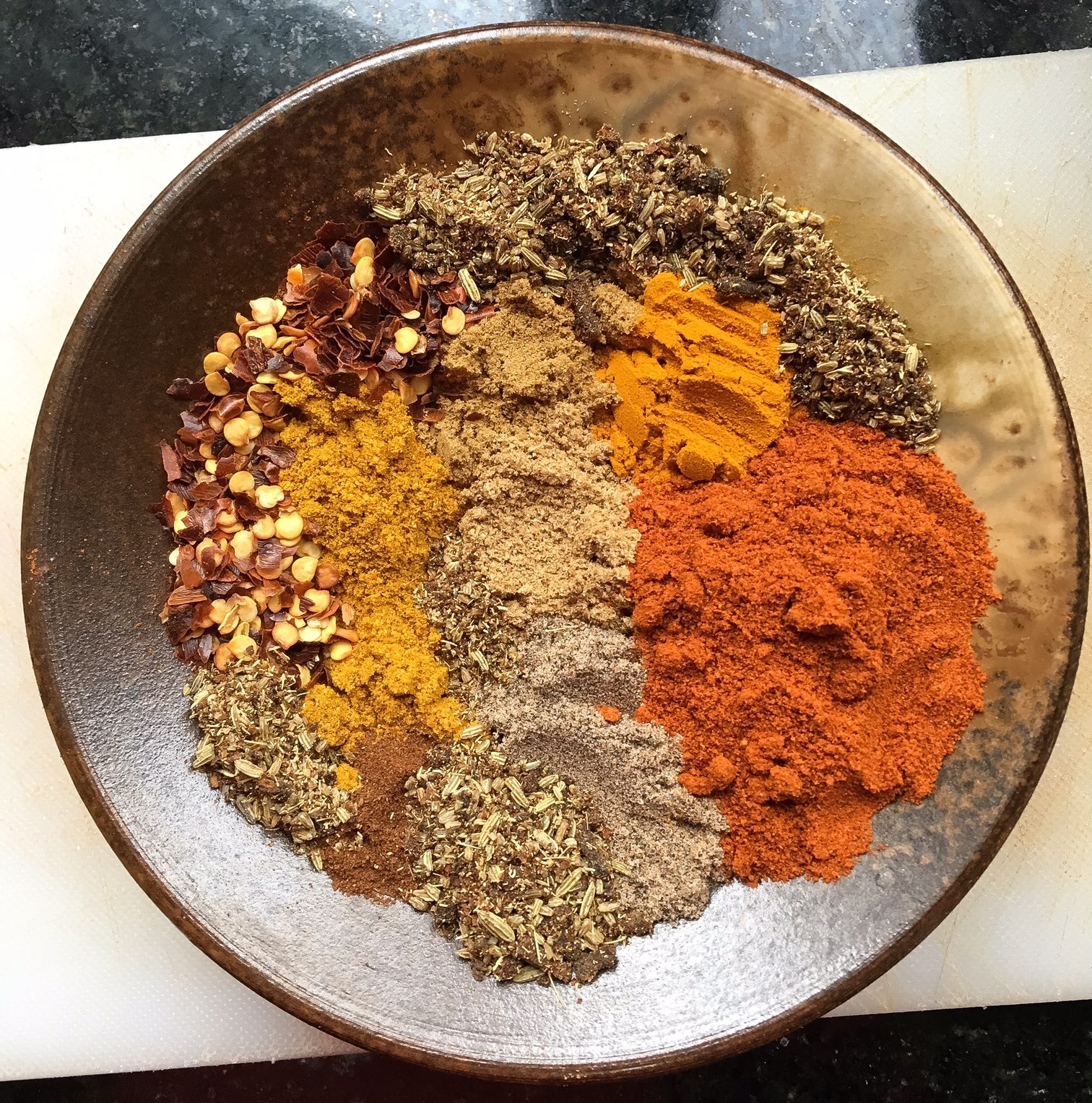 I bet now you’re thinking, “But I only have 2-3 of those in my cabinet already, I don’t want to buy a whole jar for one recipe” *ugh* *sigh* *close the browser*.  But, WAIT! You have to think of spices as an investment- yes, it’s annoying to buy so many at once when you’re not sure what you will use them again for in that moment.  However, whenever anyone asks me for advice to make healthy food taste good, I tell them SPICES are their best friend! You never know what flavors you’ll like until you give yourself the opportunity to play around. Plus, the next time you come across a recipe that calls for that specific spice, you’ll be excited when you go to your cabinet and find you already have everything you need 🙂 (Plus, have you checked out my Aloo Gobi? Another DIY takeout meal that is loaded with nutrition.)

In this version of Veggie Korma, spaghetti squash acts as shredded chicken, butternut squash acts as a potato (but has half the carbs) and the cashew cream and coconut milk replace their dairy-based alternatives to create the velvety base that makes this dish so dang consoling for the soul.

While cashews and coconuts are both high in fat, as are their animal based swaps, the plant-based creams provide the “good” kind of fat.  Coconuts are made up of medium chain fatty acids (MCFAs).  MCFAs are metabolized rapidly by the liver, providing your body with a ton of energy, and leaving them less likely to be stored as fat in your body.  Because of the resulting increased energy expenditure and and fat oxidation observed from the intake of these fatty-acids, coconut milk and oil are often promoted as “fat-burning” foods. While I don’t agree that any food is specifically “fat-burning”, there is evidence to suggest coconuts may aid in weight loss.  The fat in coconuts also contains lauric acid, a compound that your body converts to monolaurin, which has anti-viral and anti-bacterial properties, thus helping to prevent infections and viruses.

Although it’s easy towards the end of the week to just reach in the drawer and pick from an assortment of take-out menus to determine what’s-for-dinner tonight, I urge to try this instead!  I promise it’s not complicated- you can prep the squashes a day or two in advance, and if you toss the spices together ahead of time, cooking this will be a breeze! Plus, isn’t it nice to know EXACTLY what is in your food? As much as I love to go for Indian food, I’m always a little skeptical about what I’m eating (too many horror stories about people getting sick after Indian food 😉) Double plus- who doesn’t love leftovers?! I know I do! Ok, come on- I’m going to walk you through this: 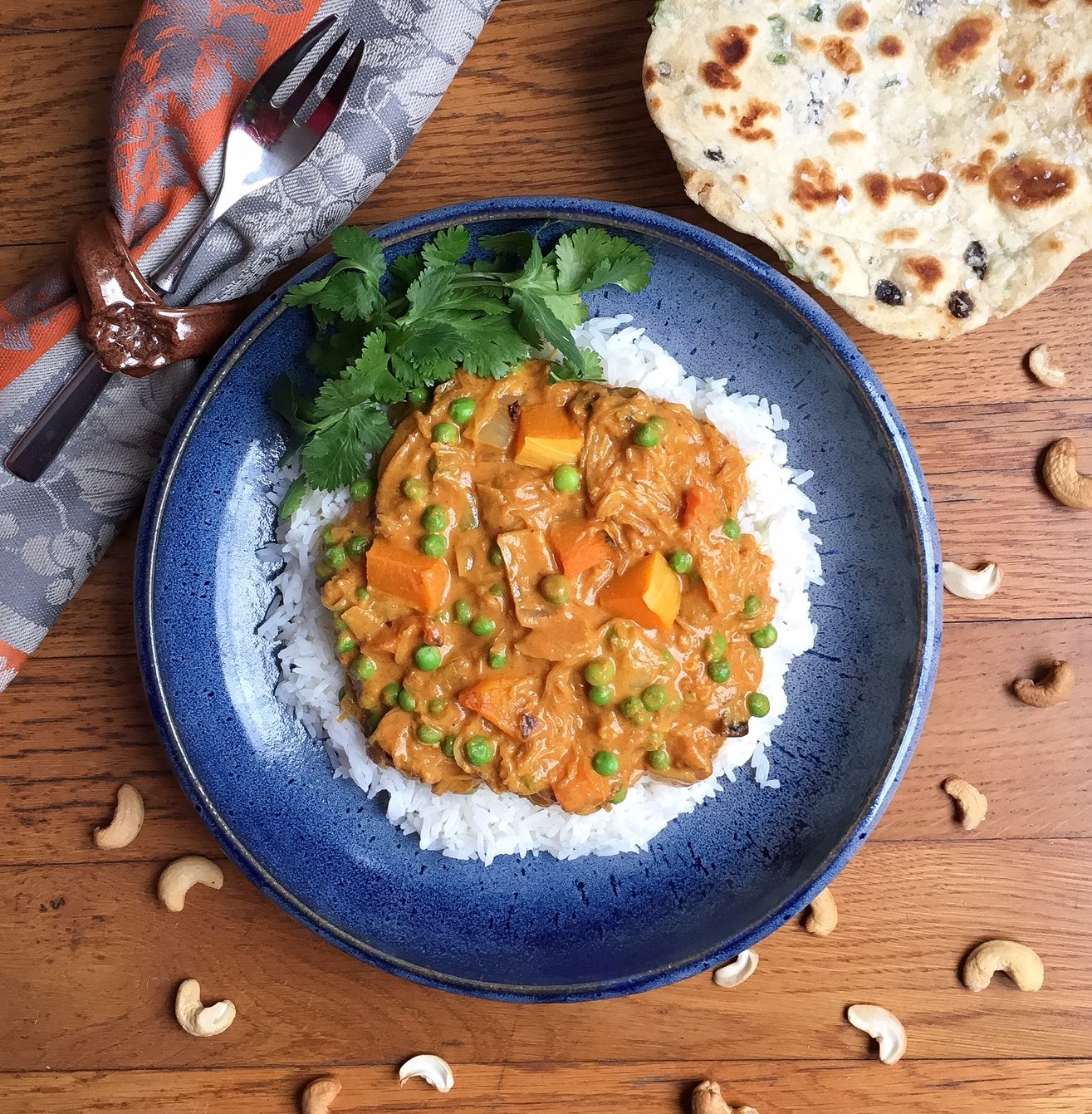 1) Up to 24 hours, but at least 4 hours, in advance, soak the cashews in 1 cup of water until they are very soft. When ready to cook, drain the cashews, then blend with the remaining ½ cup water until a VERY smooth, thick cream forms.
2) Preheat oven to 425F. Slice spaghetti squash in half lengthwise and bake 40-50 minutes or until a fork easily pierces (you can lightly brush will olive oil before putting in the oven, but I find it works just fine without it!) Once removed from the oven, use a fork to shred the squash into “spaghetti”. Meanwhile, peel and deseed the butternut squash. Chop into bite sized pieces, spread in an even layer on a baking sheet and bake 16-18 minutes with the spaghetti squash, or until fork tender. (Again, you can toss lightly in olive oil before baking, but it’s not absolutely necessary.)
3) Heat a large sauté pan with the 2T of remaining olive oil. Add the onion and sauté until soft and starting to turn golden and translucent, 5-8 minutes. Add the ginger, then garlic, sautéing until fragrant, about a minute. Turn heat to low, add the tomato paste and spices, stir until fragrant, another minute.
4) Add the coconut milk, water, lemon juice, cashew cream, and sugar. Stir until evenly combined.  Add the peas, allow to simmer until they are warm.  Sea salt to taste, then serve immediately, or allow to simmer on the stove another 20-30 min.

*One can is typically 6 ounces, so I usually just toss it all in.  However, I know how annoying it can be when a recipe only calls for 1-2T and you’re stuck with an open jar in your fridge for weeks.  In that case, don’t fuss over the little bit that’s missing- just use what you’ve got within this range, and it won’t alter the recipe much
**Squash is a food that is known to “absorb” salt, so you may need more sea salt that you’re typically used to in order to bring out the flavor of the sauce.