It’s all about dips and bites this week in preparation for the Super Bowl on Sunday!  Did you know Super Bowl Sunday is the biggest eating holiday of the year in America? Yep, you’re likely to consume more calories than Thanksgiving during the big game, and it’s not hard to see why- chips, dips, beer, pizza, wings, you name it, if it’s greasy, fried and smothered in cheese, it’s on the menu in most households. And hey, I’m all about the celebration, but I’m trying to lighten things up by bringing you a healthy appetizer each day this week, starting right now with Edamame Caviar! 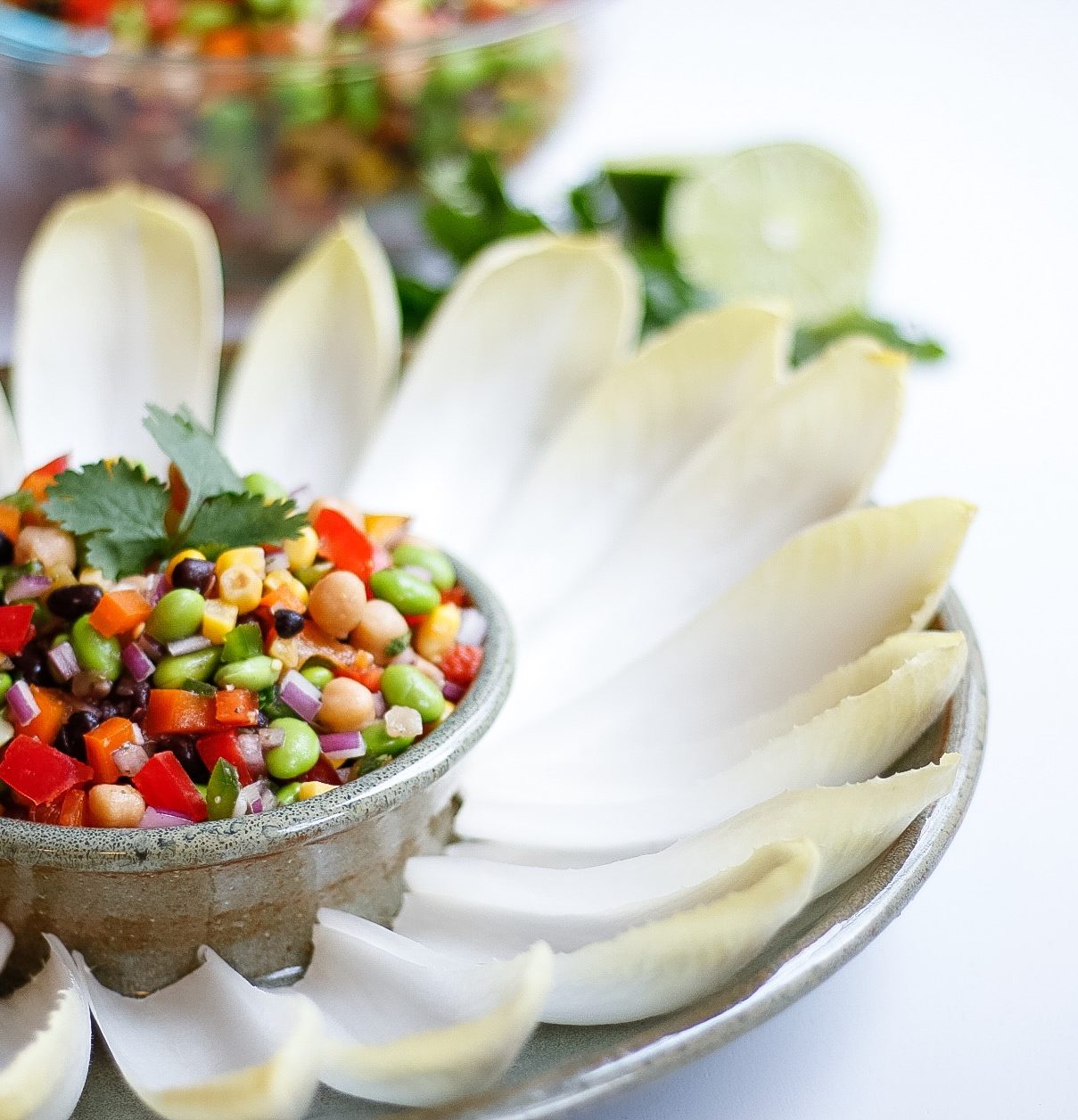 You’ve probably heard of Cowboy Caviar, but Edamame Caviar- what’s the difference?  To be honest, pretty much only those green little soybeans subbed in for black eyed peas.  Why? For starters, 1/2 cup of edamame provides 9g of fiber and 11 g of protein, whereas black eyed peas only come in at about half that with 5g of fiber and 6.5g of protein per half cup serving. Edamame is also a complete protein- meaning it has all the essential amino acids needed in the body that we can’t make ourselves.  Hence, this little bean is a great addition to any diet, specifically those that don’t eat meat.

Also provided in a mere half cup of edamame is 10% of your daily iron needs, and over half of your recommended folate intake.  Folate is a B-vitamin needed by your body to help the cells divide and produce genetic material.  Although folate is found naturally in many vegetables, beans, and grains, many companies fortify processed foods with folic acid, another form of the vitamin since it’s original form is often destroyed during the refining process. 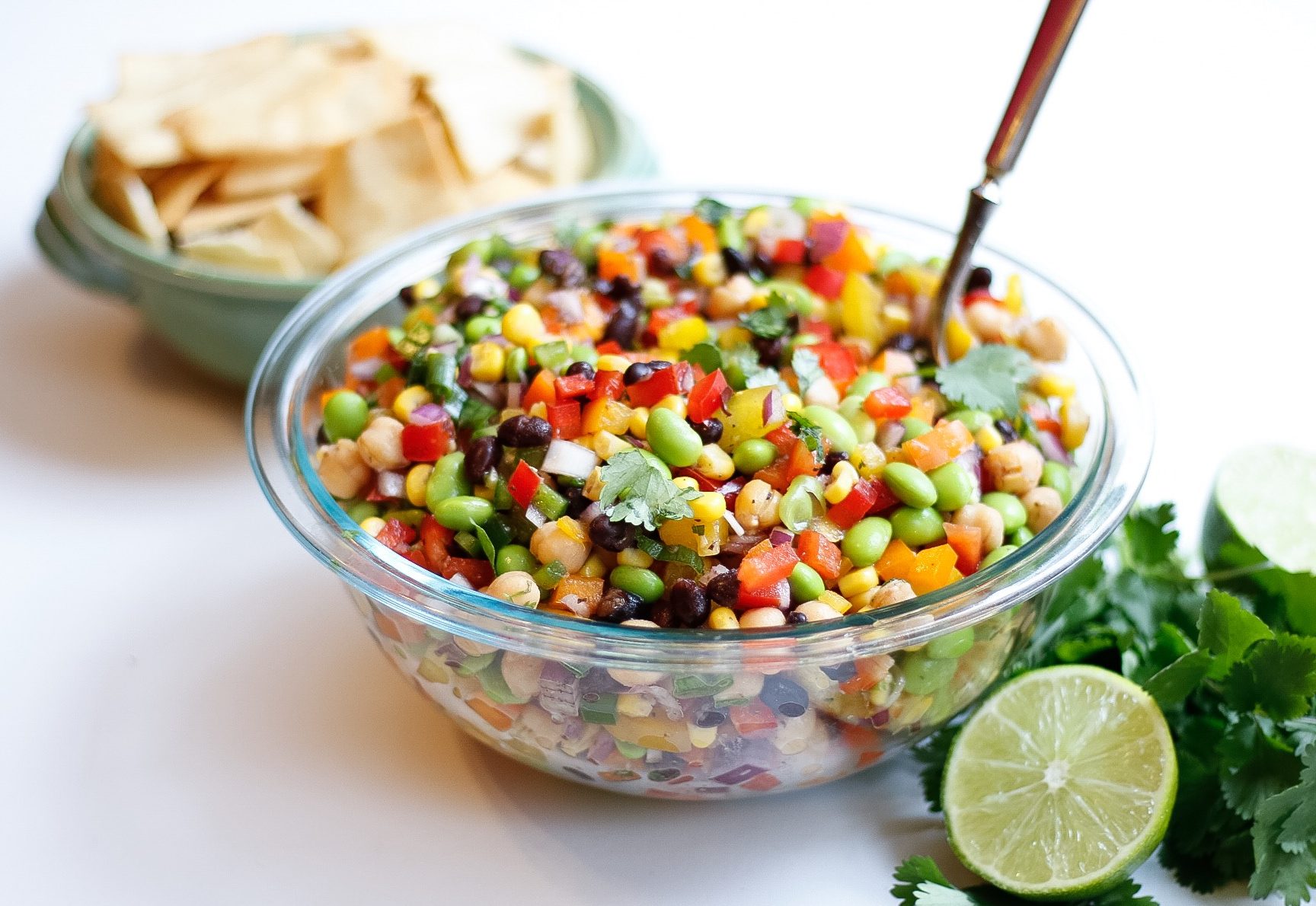 I was first introduced to Cowboy Caviar when I lived in the sorority house and our house chef would put it out for us when we were studying for midterms or finals.  There wasn’t much I liked about the food living in that house, but this caught my tastebuds instantly and I always wanted more! Before I was vegan, I also used to pick up some Edamame Salad from the prepared food bar at Kroger, and toss it into my egg-whites to liven up their bland-ness.  I always loved the firm yet somewhat chewy texture of the edamame, so I combined these two to come up with Edamame Caviar! 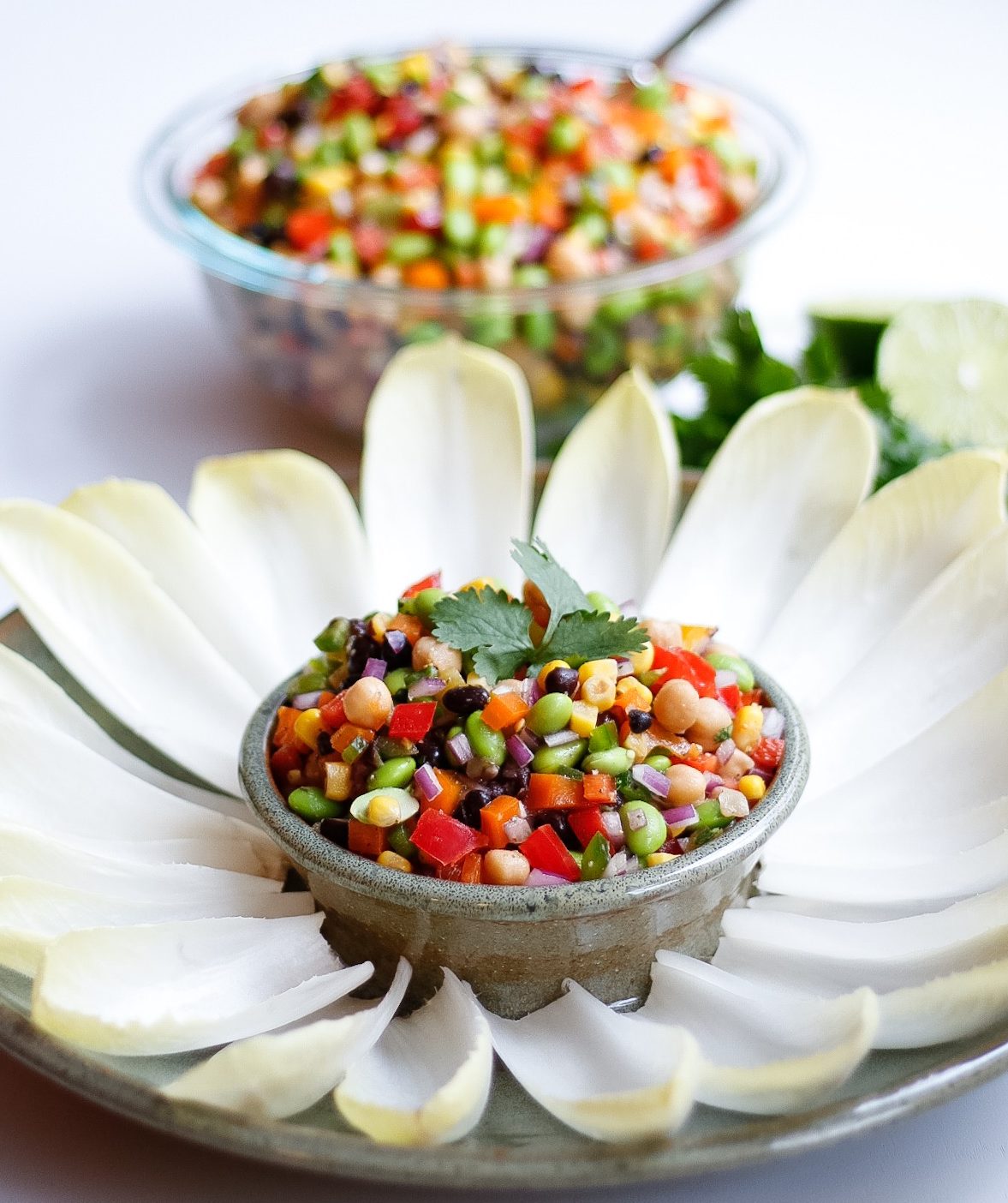 I first made this Edamame Caviar for last year’s Super Bowl, and when I rediscovered it a few weeks ago, I was shocked I had been making it all year long.  (I’ve since made it 4 times in the past two weeks). When I don’t eat it as a dip, I have been LOVING it on top of a pile of arugula with some avocado, making for a tasty little salad.

So grab a chip, cracker, leaf of endive, or heck, just pass me a spoon, and dig in! The fiber and protein in this dip will fill you up in no-time for far less calories than any greasy or friend option on the table, so no matter who scores the most points in the game, you end the game winning at staying on track with your goals! 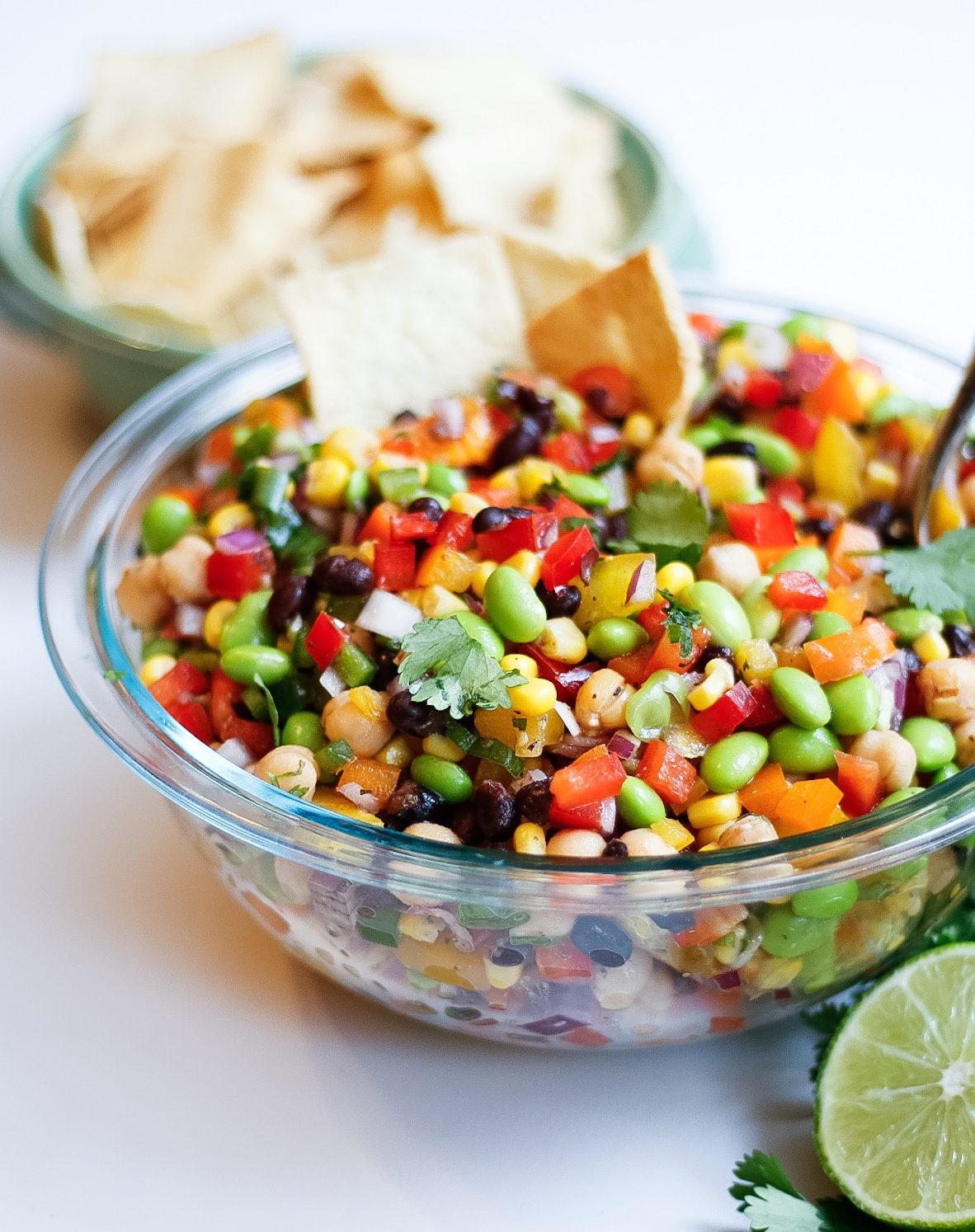 Method:
1) Pour the edamame in a microwave safe bowl, add a couple tablespoons of water, and microwave about 2 minutes, until defrosted but not too hot (Edamame sort of shrivels when it’s cooked too much). Transfer the cooked beans to a large mixing bowl.
2) Drain and rinse the black beans, chickpeas, and corn, add to the edamame. Wash and finely dice the bell peppers, jalapeño and green onion. Add to the beans.
3) Either mincing by hand, or using a small food processor, chop the red onion and cilantro. If using a food processor, just pulse the red onion so it doesn’t become too mushy and wet. Add to the mixing bowl and stir.
4) In a small food processor, combine all the ingredients of the dressing from olive oil through cumin, until the garlic is fine and the dressing is creamy. Stir into the edamame caviar, mixing until well combined. Adjust seasonings as need to taste, keeping in mind, the flavor develops the longer it sits. If using, add diced avocado shortly before serving. (I love how as the dip is dug through, the avocado sort of smashes into the dip and makes it creamy!)

*I have a thing against recipes that call for “half-a-can” of something, especially multiple half cans, because unless I have something to use that can in right away, it’s just going to get lost in my fridge, and thrown away a week later.  So, I build my recipe around not wasting food, and just inviting more people over 🙂 If you MUST cut it down, I suggest leaving out the corn and one bell pepper.  But, this not only makes a great dip, but is also great to toss on salads or top a piece of meat with.