Happy Pi Day! In elementary and high school, this was one of the best days of the year, because it usually meant we got to spend all math class simply eating pie…yeah, that was especially great senior year when it got us out of doing Calculus (aka the worst subject EVER). So naturally, today I’m sharing a pie recipe with you, but not just any pie, a Sky High Vegan Chocolate Mousse Pie.  It’s entirely epic. 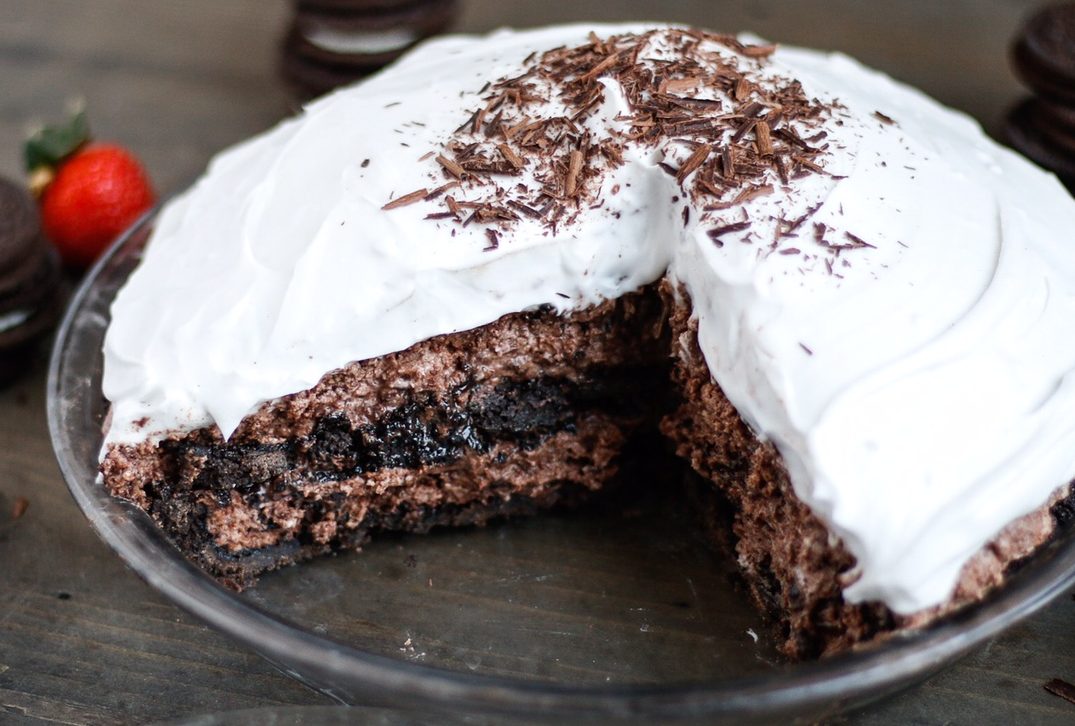 One of the blogs I love following on Facebook and Instagram to get my daily dose of dessert food porn is Sally’s Baking Addiction. Sally’s recipes are always decadent, and most importantly, they are all tested time and time again, so you can be sure if you follow her instructions, your dessert will be a success! In 2017, she added a new feature to her blog, called Sally’s Baking Challenge.  Every month she is posting a new recipe that will teach us a new “skill” in creating desserts.  This month, you guessed it, the new skill was creating fluffy chocolate mousse, featuring it in her Sky High Chocolate Mousse Pie. 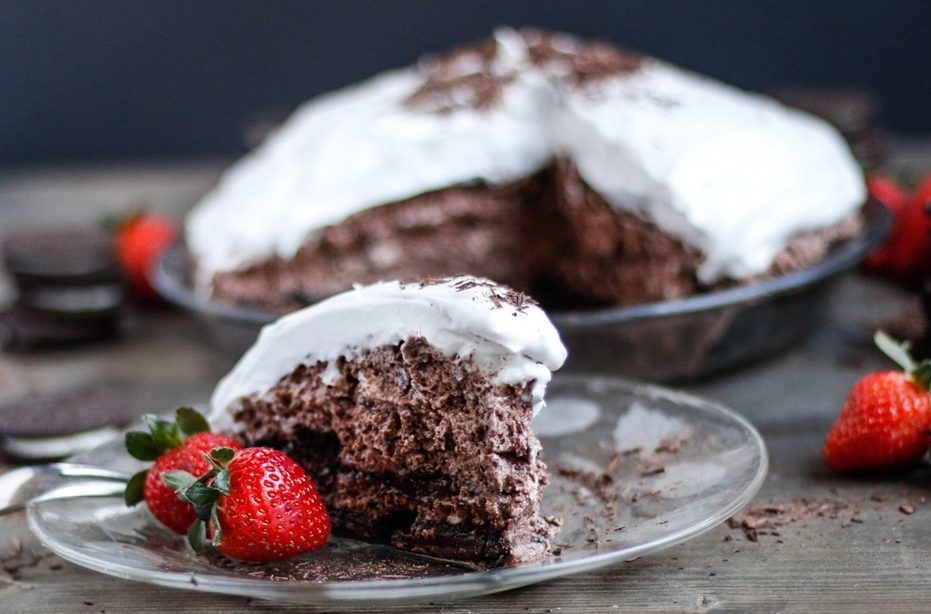 As I started looking over her recipe, I thought- I know vegan substitutions for all of these components, I bet I could easily make this plant based! So I thought I’d give it a go, taking her challenge to the next level 😉  Baking is quite the science, and has been my biggest struggle in vegan recipe testing.  I’ve had to test some desserts 15 times before I could get it to work without butter, eggs or cream.  But not this time- this Vegan Chocolate Mousse Pie turned out AMAZING.  The crunchy base, fluffy center, and then the smooth whipped topping create the most incredible bite.  It’s remarkably rich- chocolate lover’s rejoice! But the coconut cream on top balances out the flavor for those who aren’t as obsessed with chocolate as I am. (Although, you may need to get your taste buds checked…) 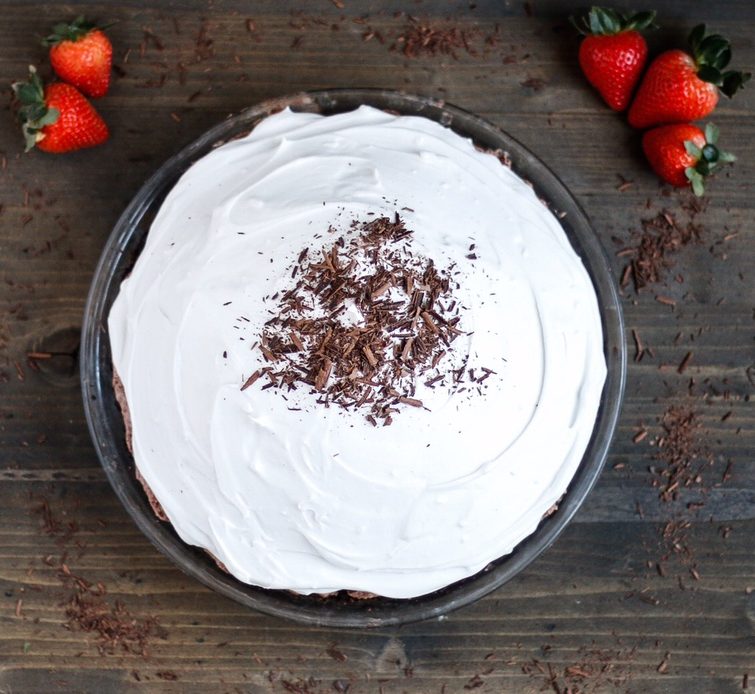 First thing’s first- make the Oreo cookie crust.  If you haven’t heard the news already, Oreos are, in fact, vegan! Let’s all take a moment to celebrate because I swear it is the one cookie that can not be replicated.  I don’t care how many “cookies and cream” knock-offs there are, nothing is as good as the original.  Now, even though it’s vegan, it is not healthy…but you know what is healthy? Having a good relationship with food and knowing that a cookie every now and then is not going to kill you! Everything in moderation- especially dessert.  Just because a dessert is vegan, doesn’t mean it’s “great” for you, it’s just made with more responsible ingredients.

When I first made this, after my timer went off for the crust I thought it needed another minute or so.  I was about to set a timer but then I thought, “Nah, I won’t forget, it’s just a minute.” *eye roll emoji* Do you know how many times I’ve said that and then I have forgotten what’s in the oven?!? You can guess how this story ends…I forgot the crust.  I don’t know how long it was, but I’d guess 8-10 minutes.  I almost had a hissy fit and debated on remaking it all together, but I was pressed for time so I said screw it! How bad could it really be? BEST DECISION EVER! After the entire pie was put together, the overdone cookie crust gave this Vegan Chocolate Mousse Pie another layer of flavor you don’t get in a traditional cookie crust.  So yes, I recommend going for the extra time when baking this (probably the only time you’ll hear me say that- I’m always an undercooked kinda gal). 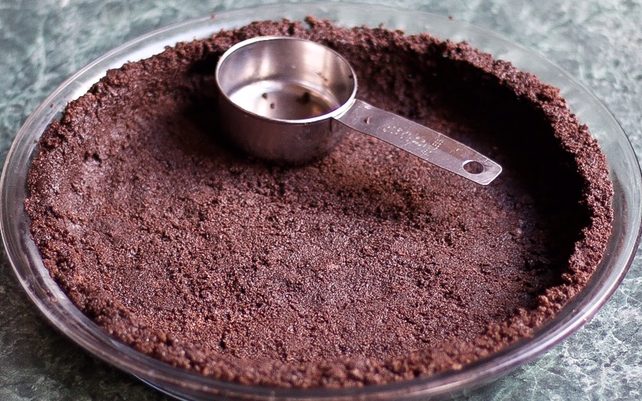 Next you need to make the chocolate mousse layer that is a combination of melted unsweetened chocolate, vegan meringue, and coconut whipped cream.  The vegan meringue is made out of aquafaba- the liquid from a can of chickpeas.  I know- it sounds DISGUSTING in a dessert, but stick with me here. It took me months to jump on the aquafaba train, and I am so glad I did.  It tastes just like regular meringue.  You eat chickpea liquid in hummus, so don’t be grossed out about it here, k? Just drain the can, save the chickpeas for another recipe, and then experience the miracle of vegan meringue. 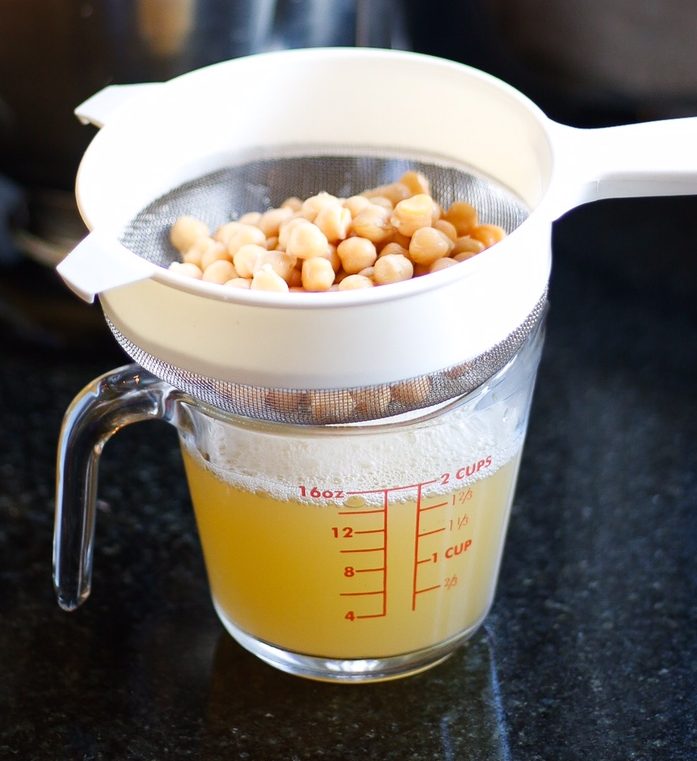 After a few minutes of beating, it looks like this- so FLUFFY! I am obsessed. 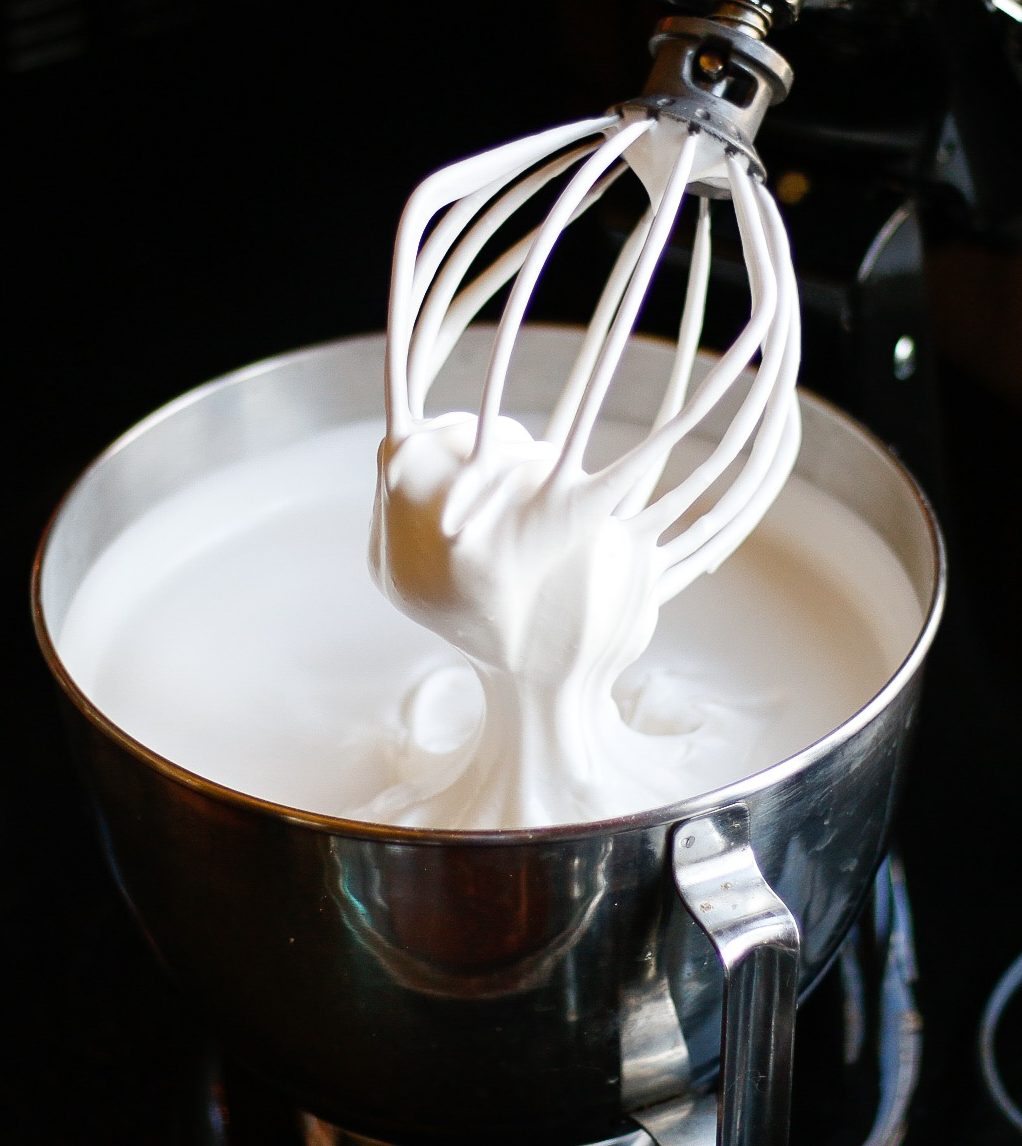 Once the chocolate is melted and meringue is made, carefully fold the two into each other.  Try not to over mix, since you still have to stir in the whipped cream. 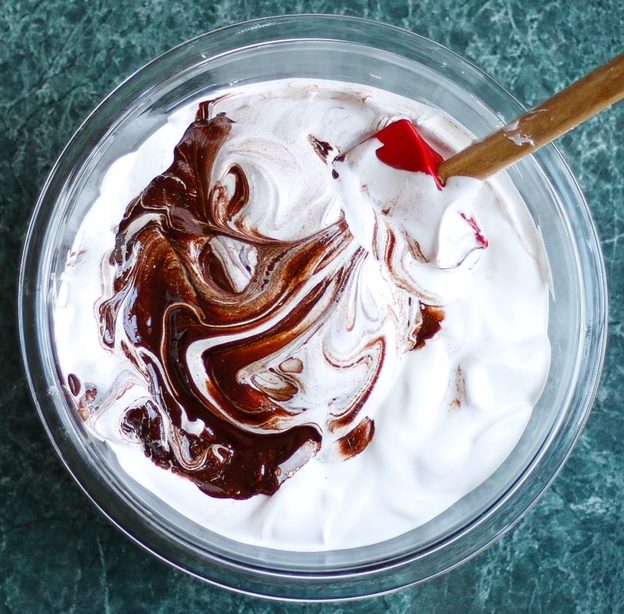 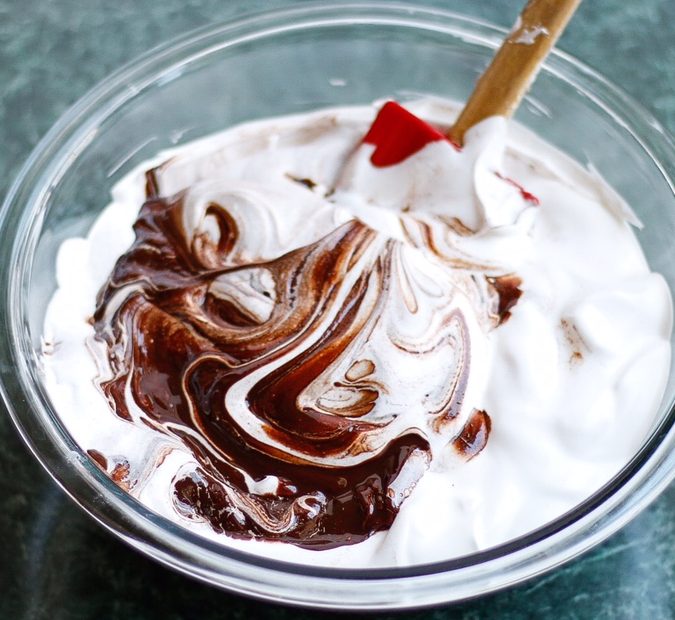 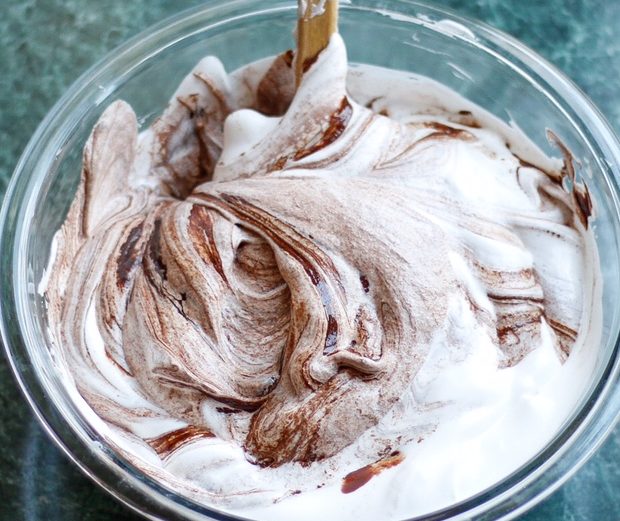 It also took me months to get on the coconut whipped cream bandwagon, since I was afraid it would be super coconut-y.  Now I’m kicking myself for waiting so long because, as you know from reading my Vegan Salted Caramel Cheesecake post, my life has been changed by coconut whipped cream.  It is to die for! Even if I weren’t vegan, I’d probably always make this version, regardless. Anyway, Trader Joe’s brand is my favorite because when I refrigerate it, I always seem to get the most cream from this variety. Sometimes I use Thai Kitchen, but more often than not only half the can hardens, which is a waste of money and then I’m left without as much whipped topping. No bueno. 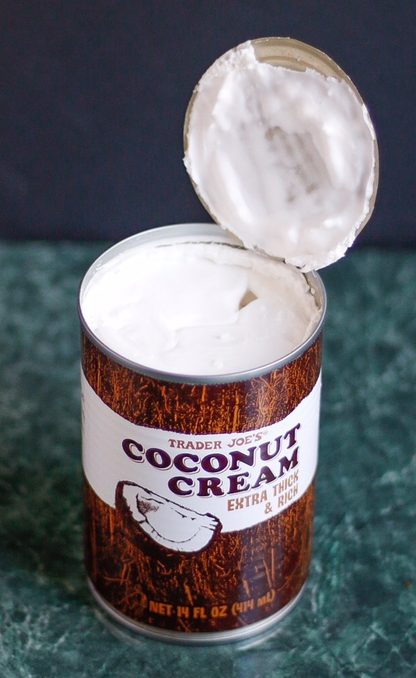 Once you make the whipped cream, add it to the chocolate mixture, and continue to carefully fold it together, being sure not to “deflate” the mousse by stirring too vigorously.

Note: Instead of butter added to the chocolate when melting, I used coconut oil.  However, when the cold cream touched the chocolate in this mousse, some of it hardened, as coconut oil does above room temperature.  It didn’t harden really hard, it was just a delicate “shell” that formed.  So, my mousse had a bit more texture than a normal variety. BUT: It ended up being completely fine and unnoticeable, since there is a middle layer of cookie crumbs in this pie already providing some texture, so if any crunch was detected, it was just assumed to be Oreos.  If you would like to avoid this altogether, use vegan butter in place of coconut oil.  I just choose to avoid vegan butter whenever possible. 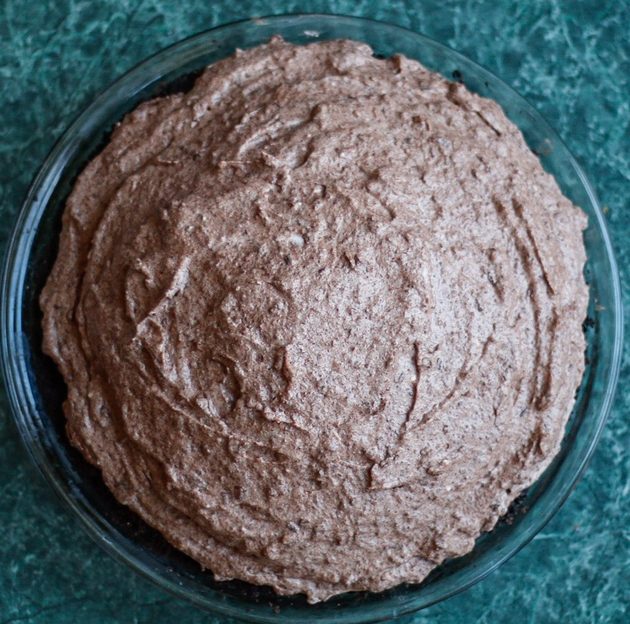 When you add the mousse to the crust, really “mound” it in the center- that’s what gives it the “sky-high” effect! I had a bit of filling leftover, so I served it as its own dessert- simply chocolate mousse topped with crushed oreos, nuts and berries.  If only I had some gummy worms, it could have been my childhood favorite, “Cup of Dirt.” 🙂 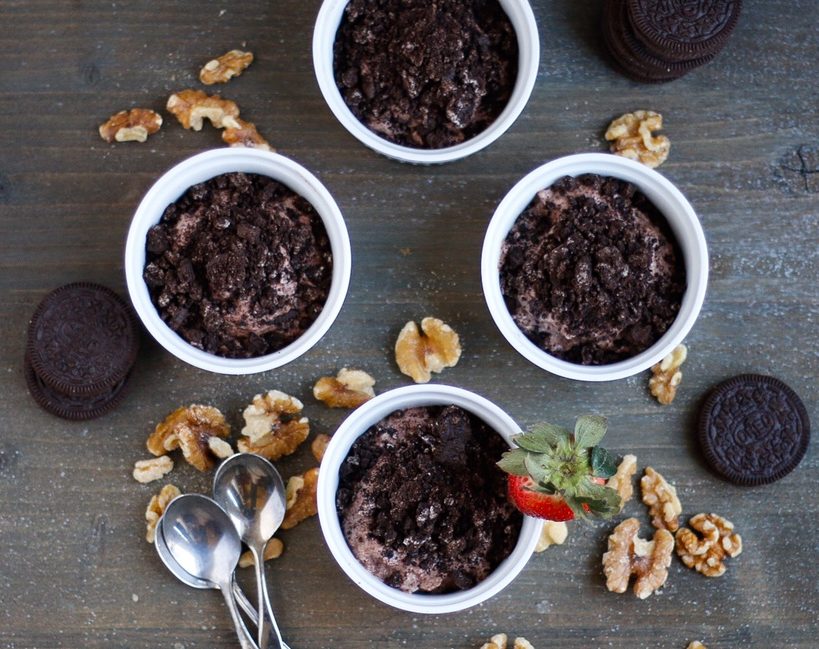 Serving this mousse in pie or on its own is the perfect dinner party dessert because it can be made ahead, and a little goes a long way since the flavor is so rich! 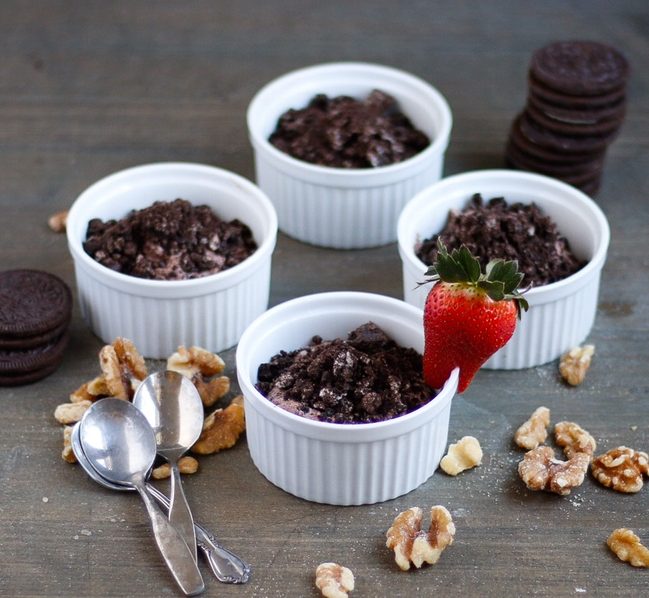 Finally, make the second batch of coconut whipped cream, spread it in a smooth layer on top of the mousse, garnish with chocolate shavings, and refrigerate. It needs to chill at least 4 hours, although Sally recommended overnight.  I first ate it somewhere around 24-36 hours after, and it was delicious, but then I had leftovers the day after that (somewhere around 48 hours) and if possible, it got even BETTER! So save yourself some stress & mess the day you’re entertaining, and make this a couple days ahead of time…you will absolutely thank yourself! 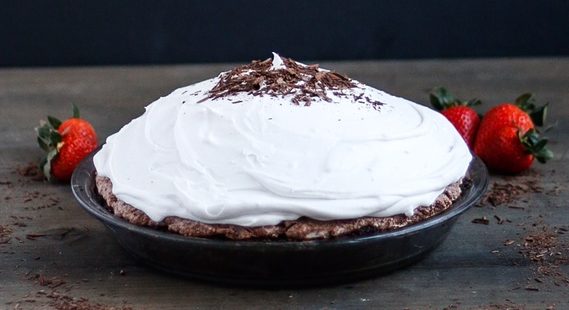 Make sure you get a bite through each layer… 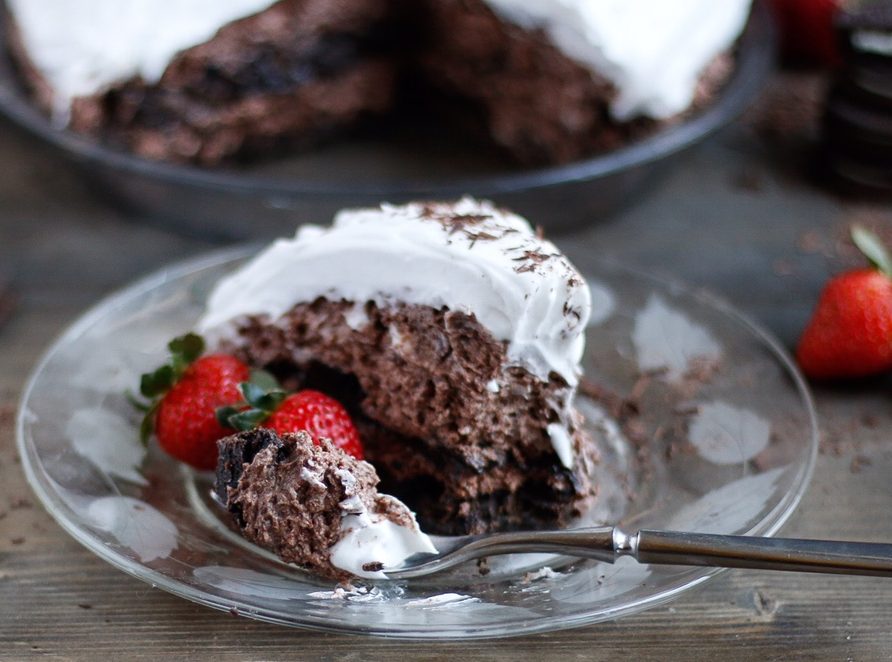 OMG are you drooling yet? I am just thinking about how good this was. 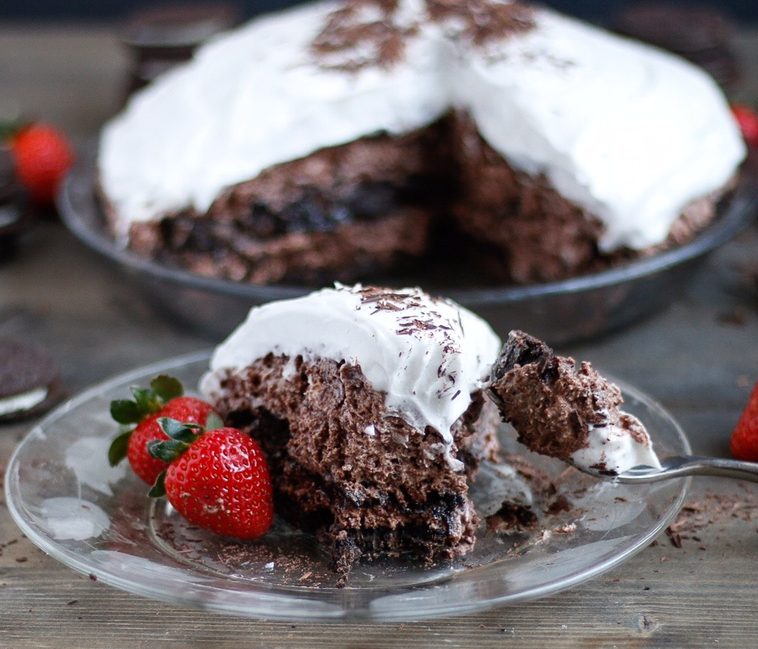 I can NOT wait for you to try this! Be sure to let me know what you think in the comments below or by tagging me on Instagram! 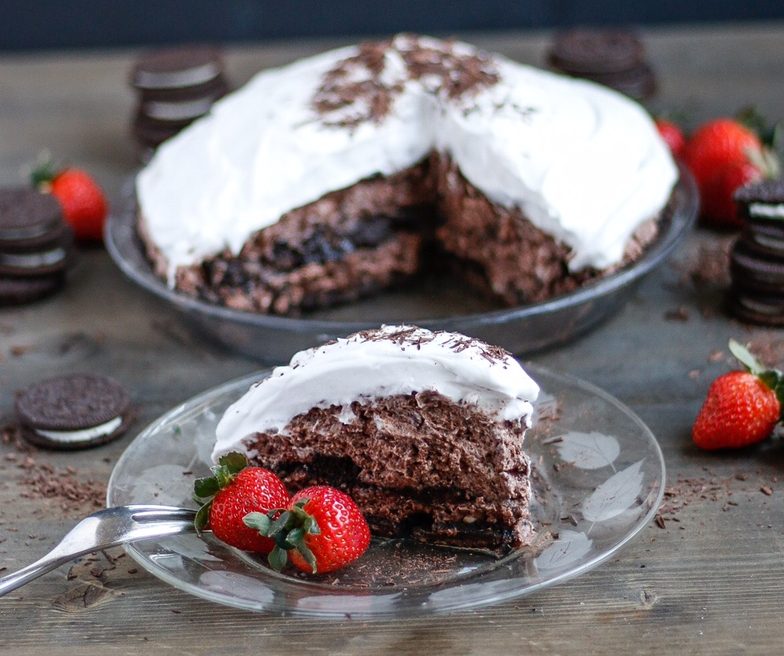 *Instead of butter added to the chocolate when melting, I used coconut oil.  However, when the cold cream touched the chocolate in this mousse, some of it hardened, as coconut oil does above room temperature.  It didn’t hard really hard, it was just a delicate “shell” that formed.  So, my mousse had a bit more texture than a normal variety. BUT: It ended up being completely fine and unnoticeable, since there is a middle layer of cookie crumbs in this pie already providing some texture, so if any texture was detected, it was just assumed to be Oreos.  If you would like to avoid this altogether, use vegan butter in place of coconut oil.  I just choose to avoid vegan butter whenever possible.

**Coconut cream is different from cream of coconut, so be careful when you’re shopping!