It’s Monday, so time to step away from the pizza and sweets the weekend brought, and reintroduce greens to our diet so we can continue to thrive!  Don’t worry, with this Brussel Sprout Grain Salad, your taste buds will be so happy, you won’t feel like your making any sacrifice in order to load your body with nutrition. This salad is the definition of Health Tasting GOOD! 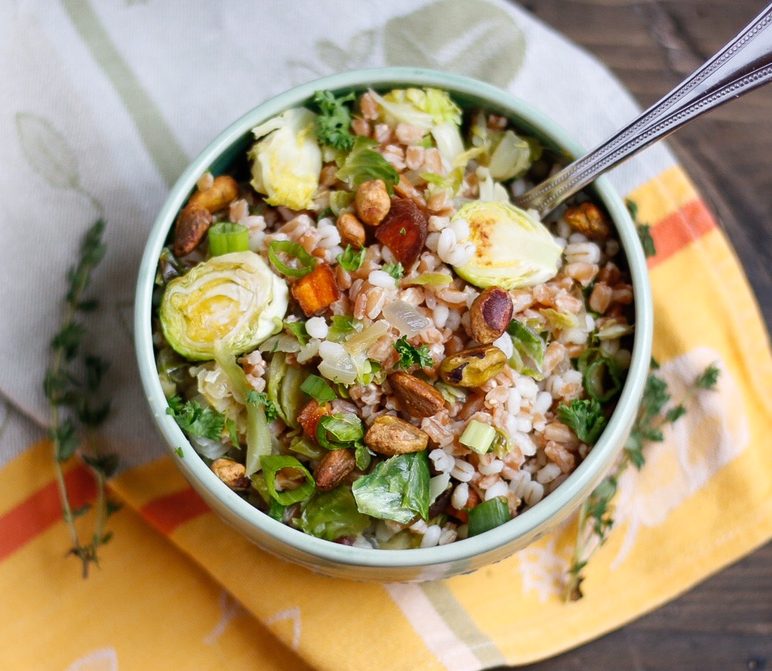 When I was dreaming up this dish, I had planned to make the base entirely out of barley.  But, when it was time to start cooking, I only had a bit of barley left in the pantry, so I thought I’d improvise with farro just as a “place holder”, since I think the two have similar texture.  But low and behold, I loved the combination of the two grains!  Barley is slightly more round and firm, while farro is tender and nutty. Both provide the incredible chewy texture I love in a grain salad, so I decided to turn my pantry mishap into a successful keeper! 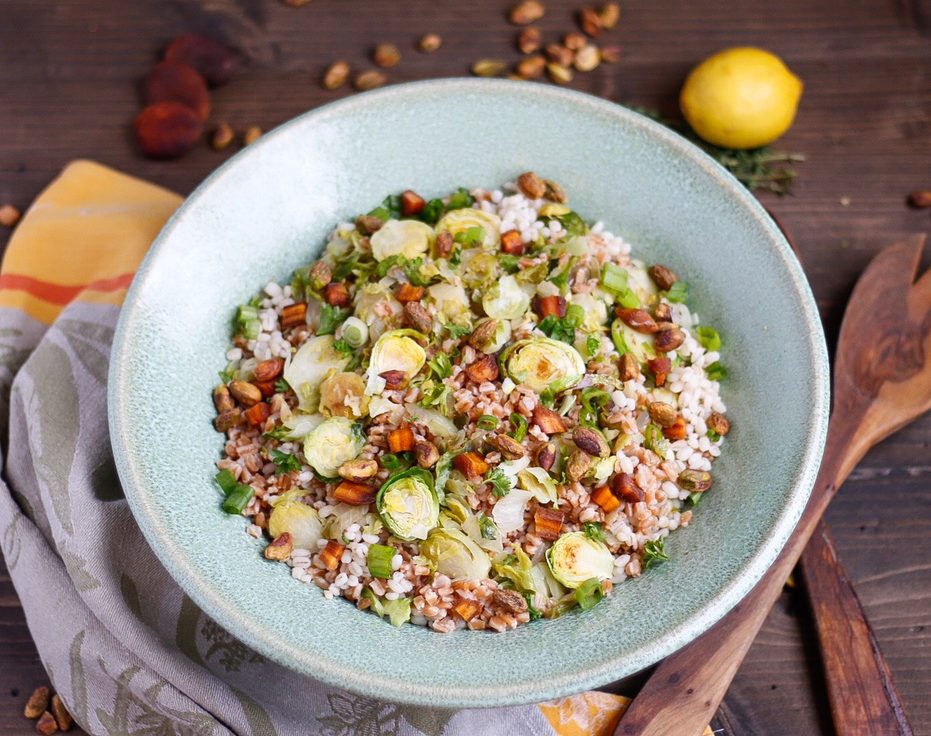 The chewy base of the grains, the hearty bites of brussels sprouts, with the sweetness of the apricots, and the salty crunch of the pistachios, is all tied together with the amazing flavor combination from the herbs. Seriously- this salad just gets better and better with each bite.  Normally, I’m all about improvising and using what you’ve got on hand (as I already confessed with the farro and barley) but when it comes to the herbs, you must have green onion, parsley, and thyme! It’s funny to think I was debating on using thyme in this dish all together, because now, that’s the flavor that stands out the most, making this Brussel Sprout Grain Salad taste so unique.  So make a list- you don’t want to forget these crucial additions! 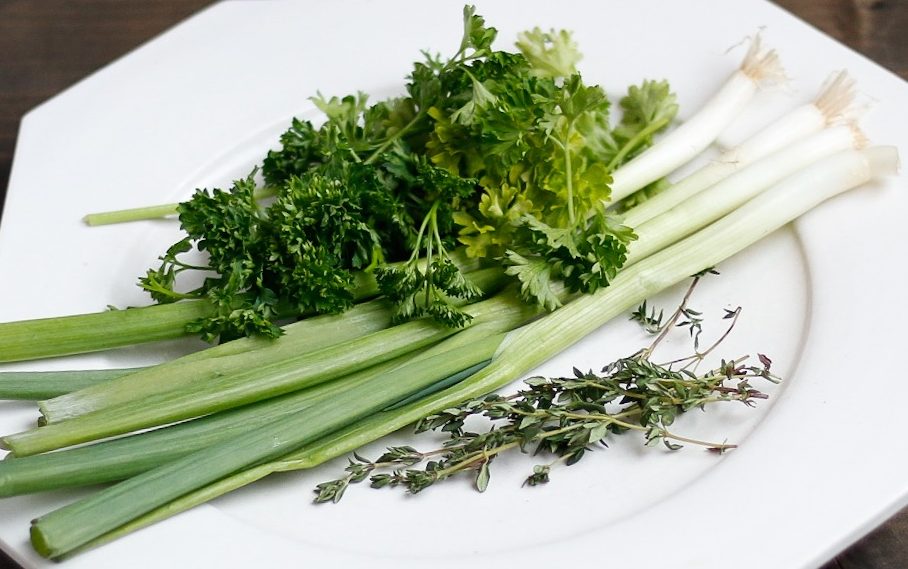 Speaking of flavor, I had also initially planned to make this with shallots.  The first go-round I did, and it was awesome.  But then the next time I went to prepare it, I didn’t have any shallots (I know, I know, I really need to get better about shopping with a grocery list) so I used a whole white onion, and a bit of red onion.  IT WAS LIKE A FLAVOR EXPLOSION.  I have never been one to notice a big difference in taste between onions and shallots (I just think the latter is cute, so I like to use them ☺️) but in this recipe, the bolder flavor of regular onions made a huge difference.  Hey, I’m fine with it, because this was going to call for 8-10 shallots, and now it just calls for 2 onions, so that is a lot less peeling, crying, and onion handling you have to deal with 👍🏻

Alright, let’s get to know the health benefits behind some of our ingredients today, shall we?

While farro is just now making a comeback on the modern day menus, it has been a popular grain in European and Mediterranean cultures for years.  Not only is it nutty and delicious, per serving it packs 7g of fiber and protein! It’s also a good source of magnesium- the trace mineral I recommend everyone supplement with if they aren’t getting it in their diet.  Magnesium is best known for its calming effects, but it’s also beneficial to digestion and muscle recovery.  While I try to consume as much of it as possible in my diet, I also drink Natural Calmevery night before bed, and notice a huge difference in my mood and digestion when I don’t have it. 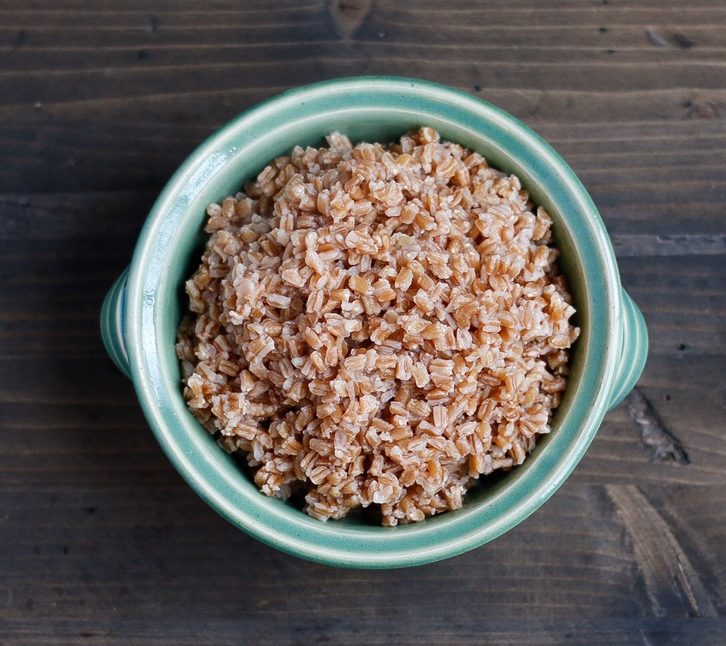 I love this little grain simply because it is sooo chewy! Barley is primarily known for it’s fiber content, which helps stabilize blood sugar, improve digestion, keep you feeling full longer, in addition to lowering cholesterol and cutting your risk for cardiovascular disease.  Barley is also a good source of selenium, the trace mineral that decreases inflammation in the body, works to increase antioxidant activity, and prevents against thyroid and metabolic disorders by acting as a catalyst for thyroid hormones.

An important distinction to note is the difference between hulled barley and pearled barley. Pearl barley has the outer husk and bran layer removed, so it cooks faster, but has a lot of the fiber and nutrients stripped from it.  You can use either variety in this recipe, I just want you to have the all the facts up front! 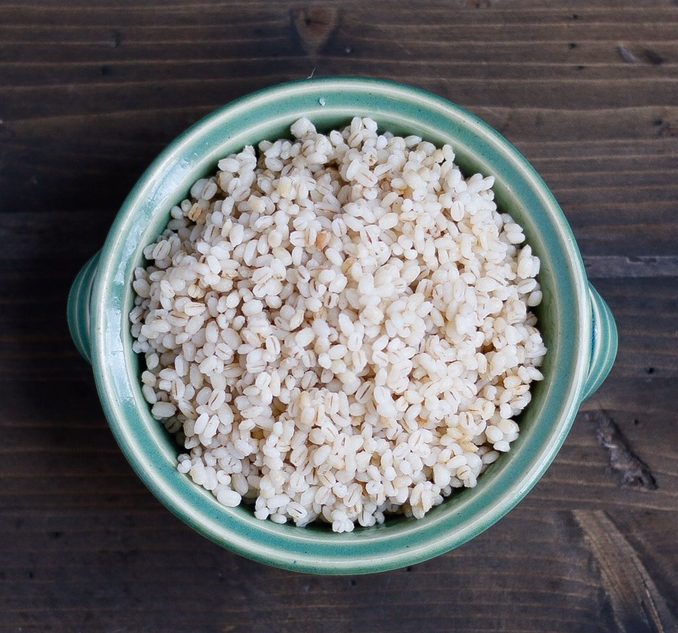 Is this the FIRST recipe on Health Tastes Good that uses brussel sprouts?! I think it is, and that’s just insanity because I eat brussel sprouts by the pound I love them so much!  I can assure you, even if they’re not in all my recipes, they are absolutely in my meal prep every single week.  Brussel sprouts are an excellent source of vitamin C, with nearly your day’s worth being provided in a mere 1/2 cup serving! The sprouts also contain sulfur containing compounds, specifically sulforaphane, which has been shown to inhibit the harmful enzyme histone deacetylase (HDAC), which is involved in the progression of cancer cells. This continued research is very promising for foods containing sulforaphane, as they could become a critical part of cancer treatment in the future with their continued ability to stop HDAC enzymes.

For this Brussel Sprout Grain Salad, I like the sprouts shaven so they’re a small, soft bite, instead of a big hunk-a-chunk.  I use my food processor attachment to shred them in less than 60 seconds, but you could also thinly slice by hand, or buy them pre-shredded. 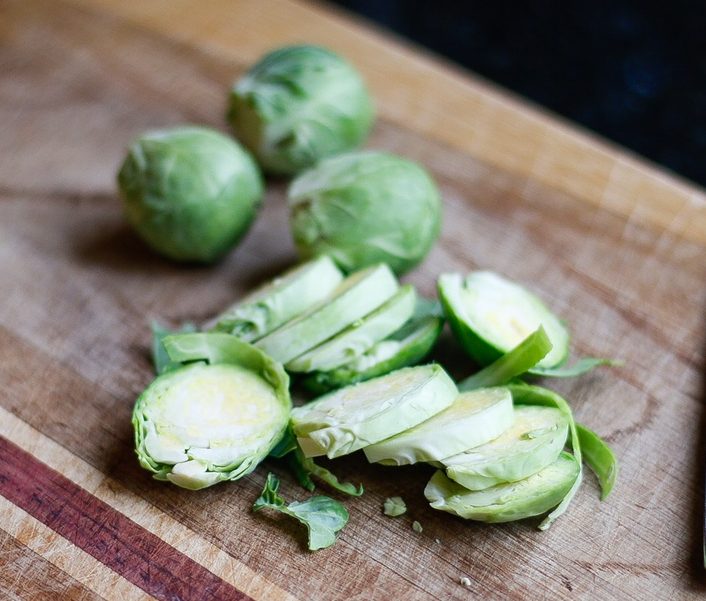 I know what you’re thinking- Uh, Ellen…Are you eating moldy apricots?! NOPE! These apricots turn brownish-black because I buy an organic variety that doesn’t have preservatives in it to keep them the bright orange color you’re used to seeing.  When you think about it, isn’t it crazy that we ingest harmful chemicals on a daily basis because our society has evolved with the need to make our food look a certain way, despite no change in the taste?!  To be honest, I never liked dried apricots until I found this unprocessed brand (linked below).  Since they’re not pumped with preservatives, they stay softer and more tender, which I love! Additionally, apricots are a naturally good source of potassium, fiber, iron, and beta-carotene.  The drying process actually increases the concentration of these nutrients, which benefits the circulatory system, proper nerve and muscle function, and also helps in maintaining your blood pressure.  Dried apricots make for a great, quick snack too- I especially like them when they’re cold! 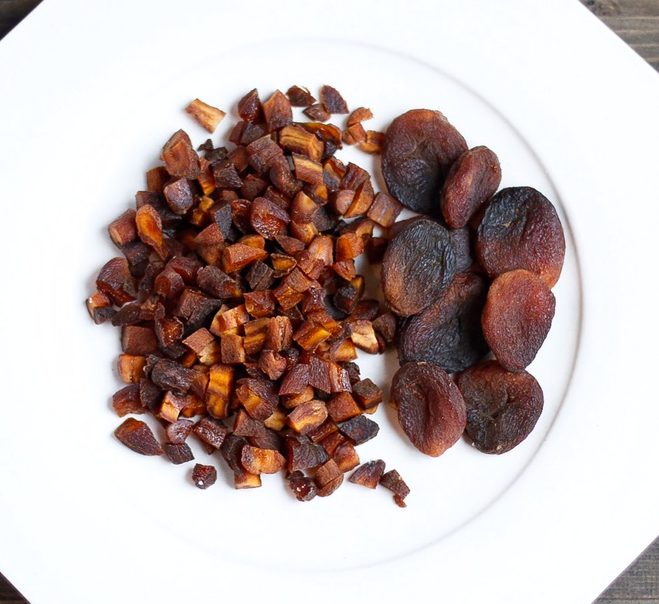 Another great part about this salad is it can be eaten hot, cold, or room temperature- making it the perfect dish to meal prep with since it will be ready to eat no matter where you are at meal time! I will say, I prefer it just *slightly* warm, so unless I’m eating it right away after preparing, I usually zap it in the microwave for about 30 seconds or so. 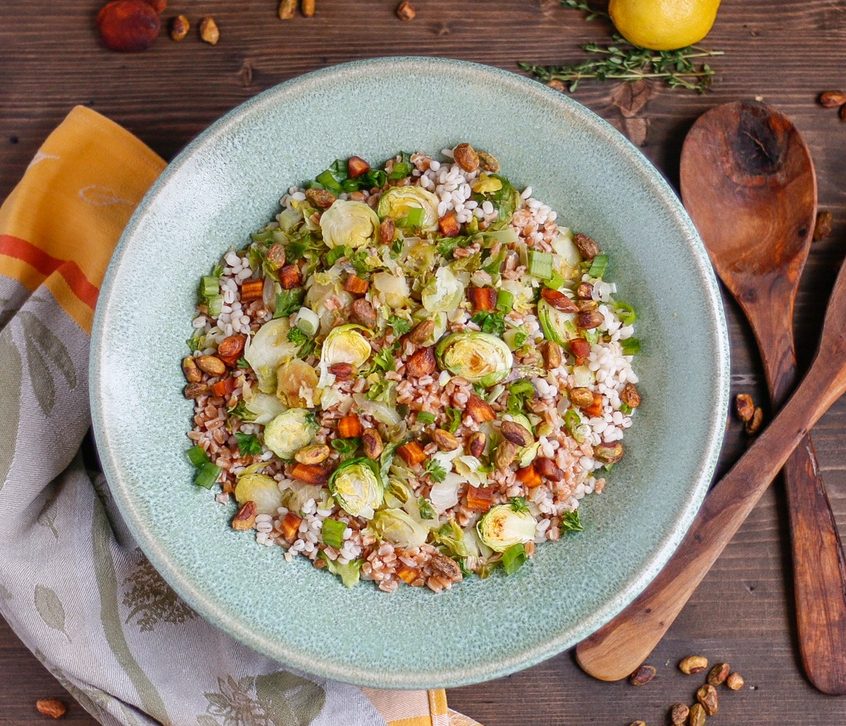 Even if you’re not vegan or vegetarian, this is the perfect meal to make for #MeatlessMonday! Then, you can eat the leftovers all week served alongside your favorite protein source.  That is…if there are leftovers.  When I first made this, my family became ravenous for it! I made it 5 times in 2 weeks- yes, it is THAT good.  But don’t take my word for it, grab the recipe below and make it yourself.  I can’t wait to hear what you think! 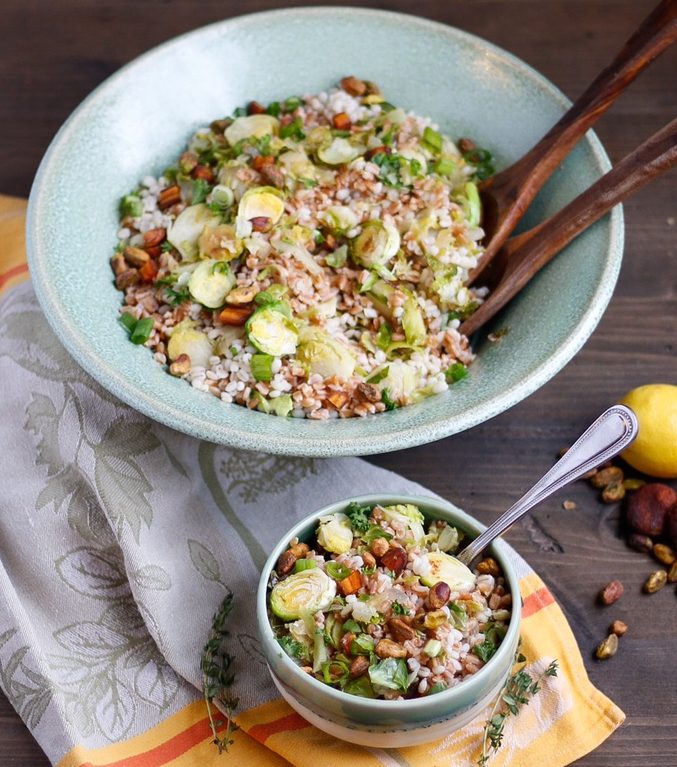