If there’s one thing Quarantine has been good for, it’s been to get me (and a lot of you, too!) back in the kitchen cooking.  Last week, I cooked something new for dinner Monday-Thursday, and each meal was BEYOND my expectations- exhibit A: this Quinoa Taco Skillet.  While I do cook a lot, cooking something new, especially during the week, is a rare occasion for me- I’m such a creature of habit.  Which is why I typically keep it simple with the same foods, and just mix up my seasonings from time to time.

But if there’s one type of meal/seasoning I’ve found that can appease literally ANY crowd, it’s Mexican.  Throw some taco seasoning, cheese, avocado, and some salsa amongst any ingredients… and it’s guaranteed to be a winner.  Ok, maybe not guaranteed, but it’s really hard to mess it up.  Not ready to tackle throwing-a-bunch-of-shit-together-and-hoping-it-turns-out-ok just yet? Don’t worry, I’ll guide you through how to make this Quinoa Taco Skillet below, and everyone will think you’re the next Top Chef. 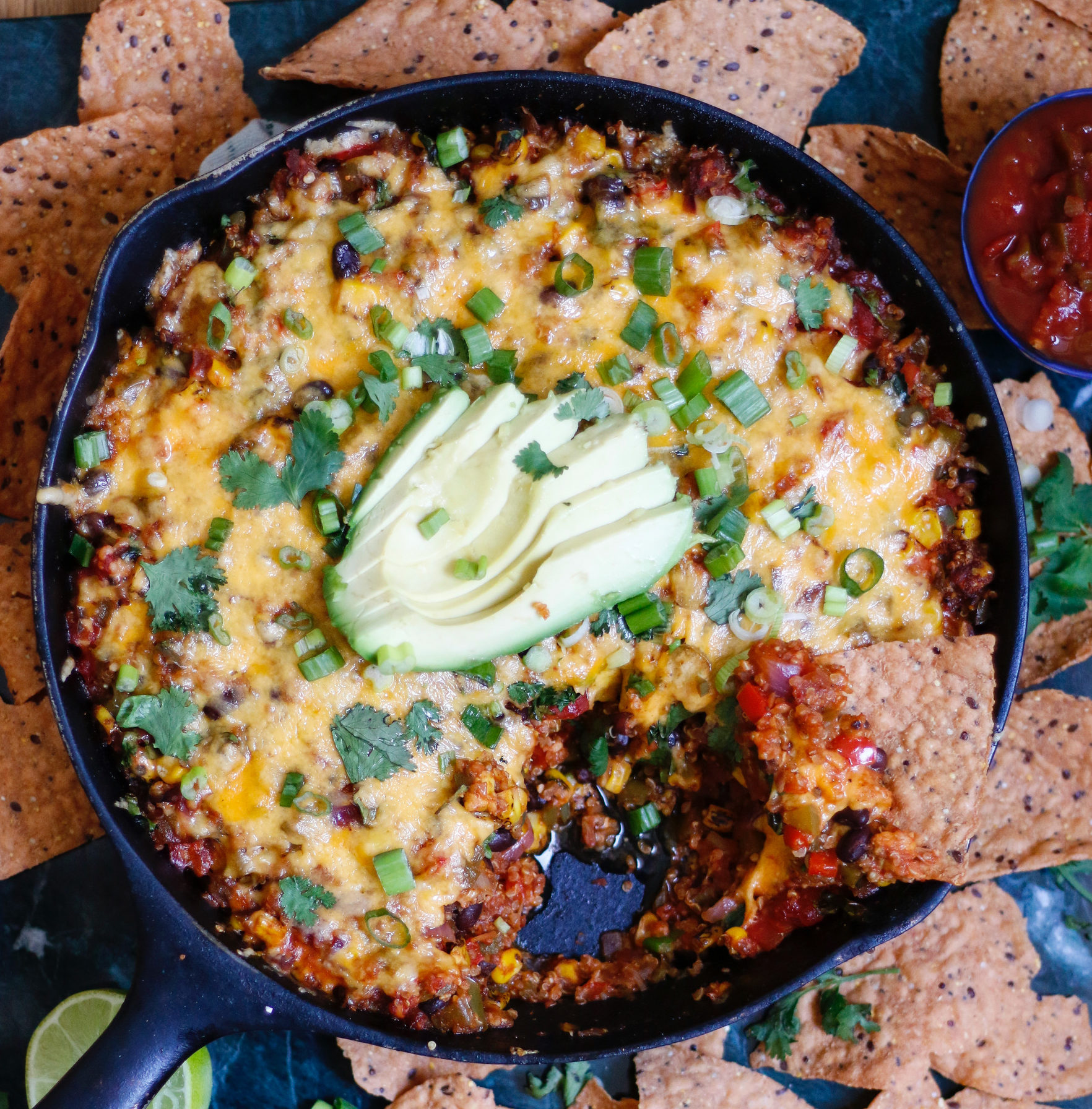 So, I originally made this Quinoa Taco Skillet to be a sit down dinner meal.  But as I put it on the plate with all the gooey cheese and the saucy salsa, it was just begging to be scooped up with a chip. And as you can imagine, once we got the salty taste and the satisfying crunch that is dip-on-a-chip, it’s hard to stop after just one.  And so, the first night we ate this we ended up scooping straight from the skillet with our favorite red quinoa chips, and then dolloping a spoonful of my Ultimate Guacamole on each bite. To be honest, I wasn’t mad about it one bit. 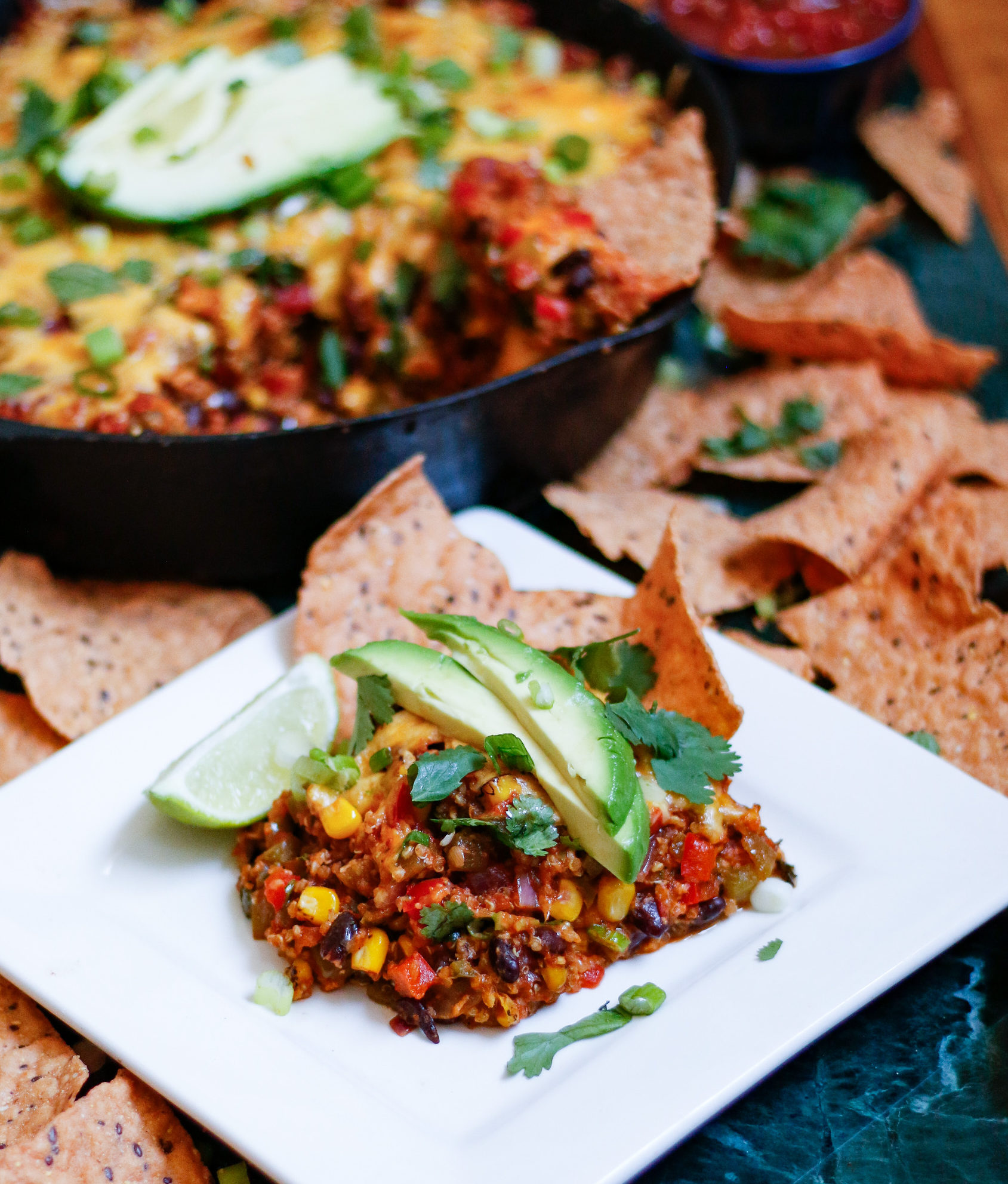 In all honesty, I could keep the rest of this blog really short: You need to make this Quinoa Taco Skillet NOW. Cut-End Scene-We’re done here. 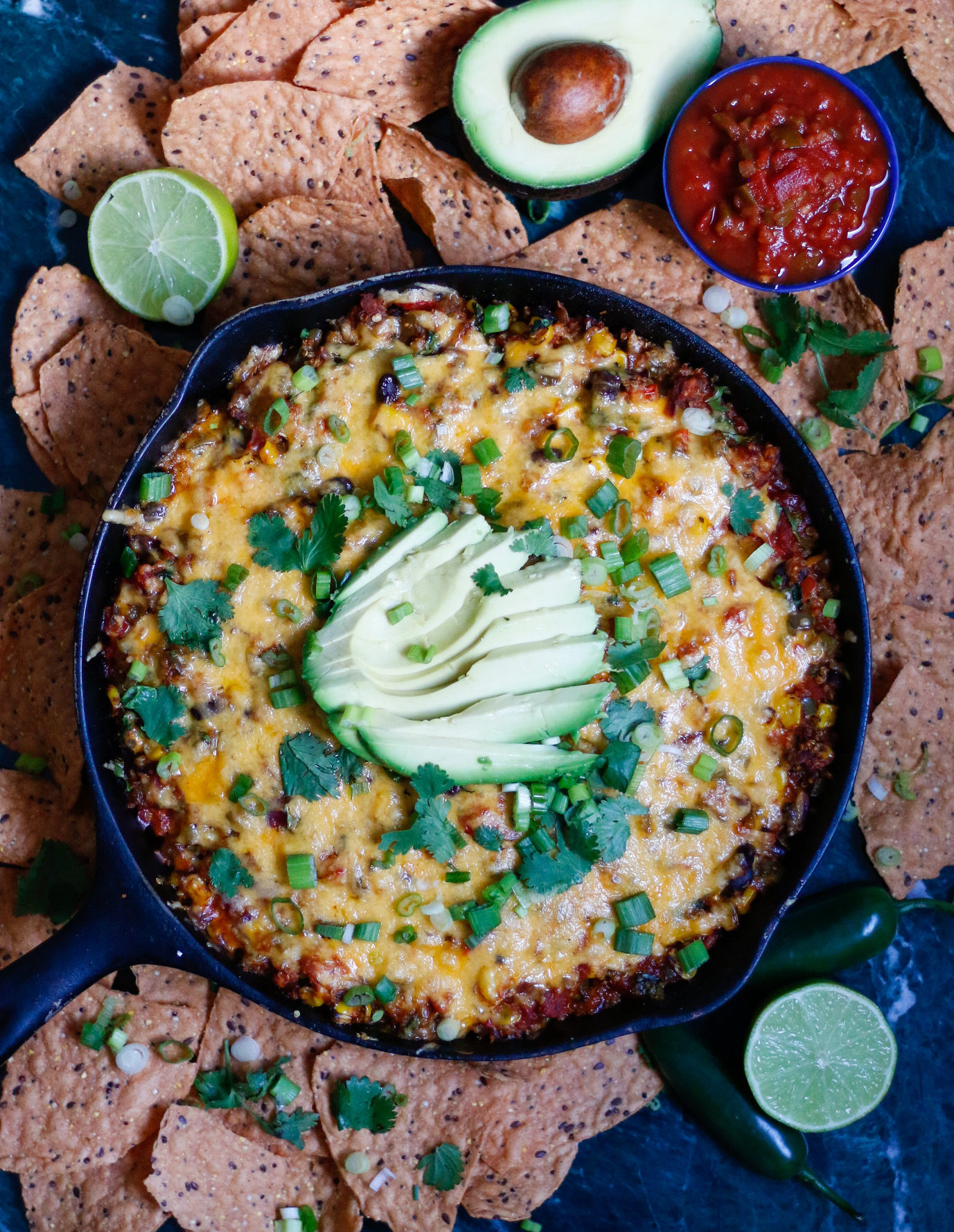 Ok ok, if you haven’t already skipped to the recipe, I’ll tell you a little bit more.  Aside from being a versatile casserole dinner, chip-and-dip appetizer, or even a salad topping for later on in the week, I love this Quinoa Taco Skillet because you can customize it to the meat lovers and vegetarians alike! Just as the recipe is below, it’s packing tons of muscle-building plant protein from the quinoa and the combination of black beans and corn together.  (Black beans have about 8g of protein per half-cup alone, but when the amino acids of black beans and corn are eaten together, they form a complete protein- more similar to animal based protein- which makes it more efficient for your body to utilize).  But, if you want to add some meat to the recipe, you can saute diced chicken breast in another skillet to the side and spread it out over half of the skillet before baking, OR you can swap out one of the bell peppers for ground chicken/turkey/beef and add it to the pan right after the peppers have caramelized, and then continue preparing the recipe as written. You really can’t go wrong!

Did I mention the cheesy, saucy, spicy goodness??? I’m craving it all over again! 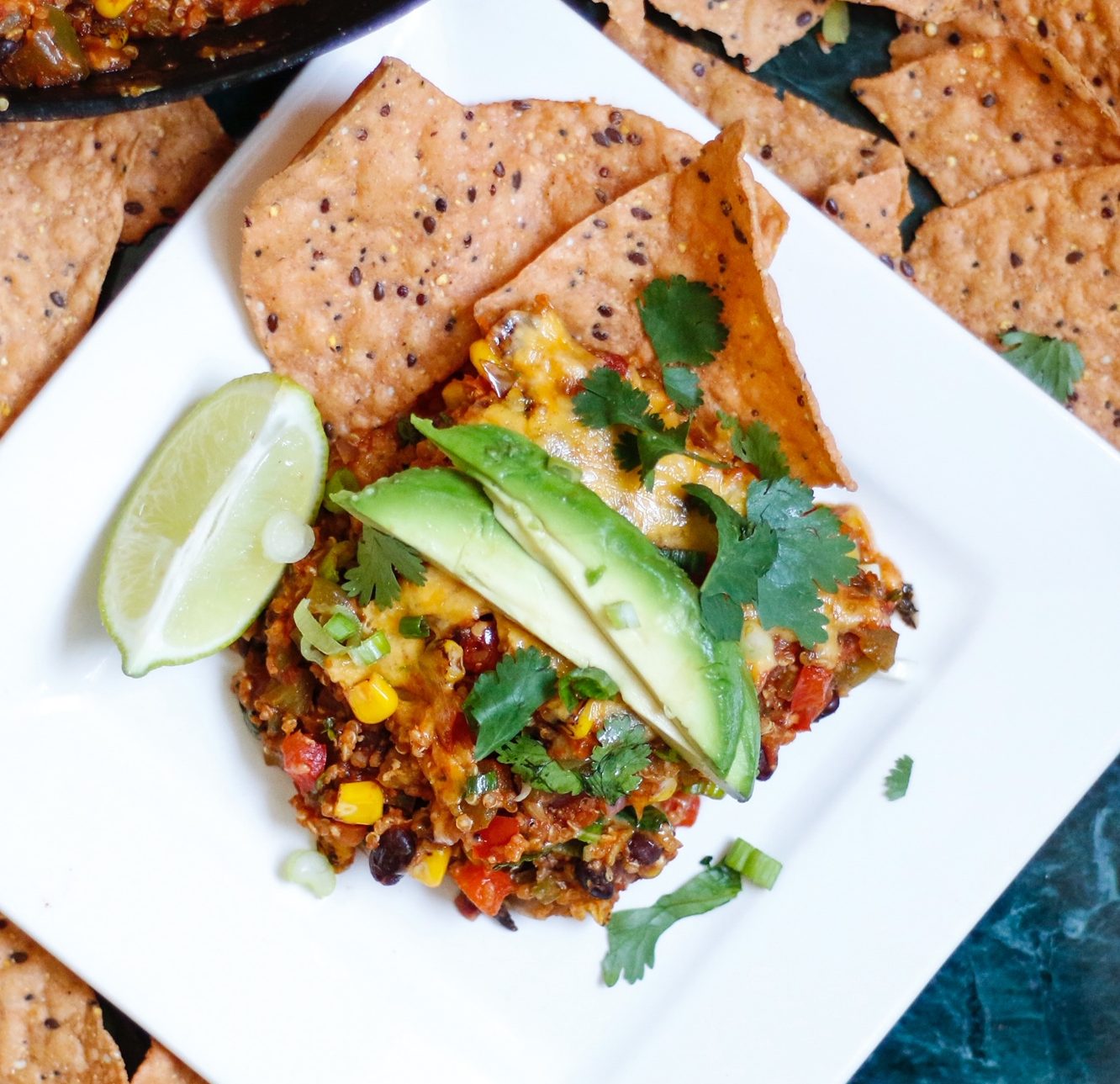 If I haven’t sold you yet, the best part about this Quinoa Taco Skillet is that it makes A LOT! Don’t fear- it’s great for leftover meals throughout the week, or do as we did, and pop the leftovers in a smaller skillet on Friday night, add a bit more cheese to the top, reheat, and then serve it as a Happy Hour appetizer. Done and done- you’re going to love it! 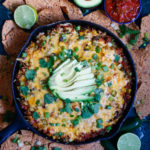 *While specific brands don't really matter, I did use Trader Joe's taco seasoning, frozen roasted corn, and their "Thick and Chunky" salsa.  I love the flavor and convenience of all three!

Add to Favourites
By EllenFood